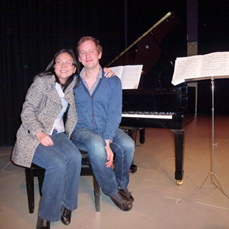 Min-Jin Kym and Alasdair Beatson are international musicians whose 'British Home' could be thought of as the Wigmore Hall; however last Saturday night they were perfectly at home at The Arts Centre, Teignmouth Community College. The audience had travelled from beyond Exeter, Totnes and Ashburton to hear their violin / piano French and Russian programme. Their photos in the Nadsa Concert publicity had led me to expect something sophisticated and staid; instead the visuals were understated, but the music was brilliant.
Alasdair Beatson's first few phrases of the piano introduction to Faure's violin Sonata No1 went straight to the heart. Min-Jin Kym's entry made it a magical partnership of exquisite musicality. The first and fourth movements were dramatic and full of spirited contrasts, whereas the second was characterised by beautiful sensitivity; the third movement was delicately fast and furious fun.
Debussy's Sonata in G for violin, the only work he ever composed for violin, opened with piano chords that immediately evoked nostalgia. However, later, there was a full range of moods and volumes from the quietest of pianissimos to energetic fortes.
Min-Jin Kym carried us melodically into Prokofiev's Sonata No 2, a piece originally tailored for David Oistrakh. Quite soon it was apparent that this was something of a virtuoso offering as she flung herself into multiple stopping with deserved confidence and resounding pitch. The next movement was a 'Presto' which fair took one's breath away, only to be followed by an 'Andante' that led us into some bluesy areas. Finally the mood was joyous with even more virtuoso playing.
My only regret is that we were left on such a high. Obviously their skills could manipulate our emotions. I would have liked a short encore that soothed and calmed us down: I would still have wanted more.
These are two young rising stars to watch out for.