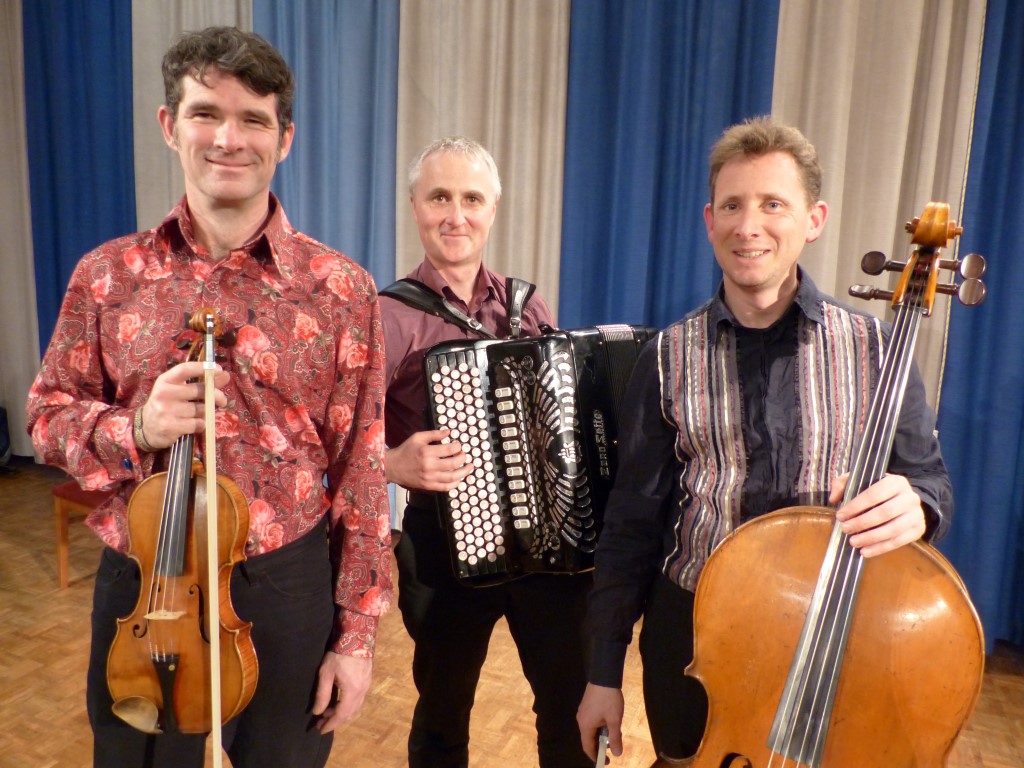 Pushing boundaries can be risky; bringing the Zum trio to Newton Abbot was certainly worth it. There was no written programme, which immediately set them apart from any 'normal' concert, and their style defies pigeon-holing. Gypsy Tango, their creation, was rarely far away, though the multiplicity of influences on their playing and composition was mind-blowing.

Adam Summerhayes was playing on his violin as the trio walked through the packed Courtenay Centre Hall: nothing pretentious here. Joined by Chris Grist on Cello and Eddie Hession on accordion, light hearted themes emerged and the tempo pulsed to a frenzy. The 'Penultimate Tango in Paris' smoothed us with a sultry but very controlled nuevo tango style, only to be followed by an accordion-led piece that put me firmly in Paris; though that was Argentinian, we were impishly told by Chris Grist doubling as master of ceremonies. And that was probably the nub of the show: provenance is irrelevant. What captivates is sensitivity and virtuosity. We had endearing anecdotes from Chris regarding Zum's globe-trotting experiences, and the perpetuating of the urban myth regarding the Hungarian Suicide Song 'Gloomy Sunday' which they then performed. Such juxtaposition of compulsive humour and sombre haunting bleakness showed superb musicianship. Their show closed with a scintillating display of virtuosity in both a Hungarian Polka and Adam's composition 'Five Naked Ladybirds'.

We were in awe of this group at first hand. Reading their credentials of course we shouldn't have been so surprised. It seems that if an accordion player is required anywhere from Hollywood to working with the Three Tenors, then Eddie Hession is the man; Adam Summerhayes comes from a line of classical violinists and is acclaimed for an eclectic list of recordings; and Chris Grist, besides being an excellent cellist, also had the power to hold the audience in the palm of his hand. Great that they can now add The Courtenay Centre, Newton Abbot to their list of venues.