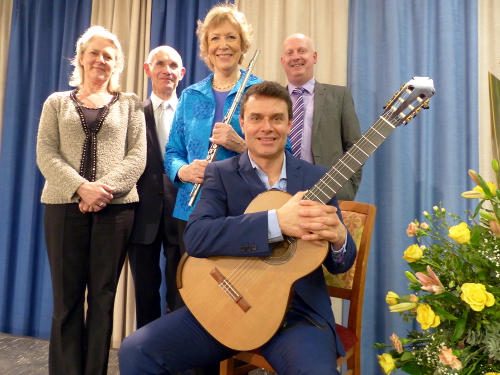 An audience, on seeing the programme of this flute and guitar concert, might have been expecting a pleasant potpourri of vignettes; but this Nadsa concert went far beyond that. The carefully crafted programme contained such a variety of styles of music to hold any audience, that only skilled performers could carry it off. Judith Hall, Australian born with local connections, and Craig Ogden, also an Aussie, gave us a performance of universal star quality.

Ibert's Entr'acte [1937] was a spirited opening to the concert with the flute taking a swirling melodic line whilst the guitar atmospherically set the flamenco scene. Giuliani's Gran Duetto Concertante took us back to the 18th Century and to an Italian style. The first movement was in contrast to a dancy minuetto where the guitar became prominent, and even more so at the beginning of the Rondo militare, a movement in which they later developed delicate ornamentation.

Our thoughts about what repertoire there is for such an unusual duo combination of instruments were charmingly addressed by Judith; and of course, if it doesn't exist, they adapt scores from other instruments. Easily said, but much more difficult to execute effectively. Judith also admitted to devising the programme; well, by the end of the evening, one would say she should take credit for it!

Villa-Lobos' Bachianas Brasileiras is so well known that comparisons make live performances a risky business. But what a dream this was. The apparently effortless overarching phrasing of the flute was superb, and Craig's guitar somehow made an orchestra superfluous. Lest we got musically complacent, Milhaud's Corcovado followed with its less familiar form, though rhythmically maintaining the South American connection. Three of Beaser's Mountain Songs, written for flute and guitar, brought us right up to date with an extant composer. The wistful 'Barbara Allen', busy 'Carpenter, and the lively, folksy, syncopated 'Cindy' not only gave us variety but demonstrated how this duo could switch our emotions so quickly.

With a very relaxed manner Craig not only amusingly introduced some of the evening's items, but was also engagingly informative about his 'Smallman' guitar, which like himself is a very special Australian import. A guitar concert without Albeniz's 'Asturias' would seem wanting; but here again our live performance exceeded our expectations. The large audience was mesmerically held through flamenco and the tension of pin-drop silences.

A version, for the duo, of Django Reinhardt's 'Nuages' was another change of style as we were immersed in swing jazz; though the improvisations around the theme seemed much too clever for 'clouds'.

It was during Beethoven's two Sonatinas that my admiration for Craig's playing took another leap. Never have I thought the guitar could sound so much like a piano; and this style was continued with Poulenc's Movement Perpetuals. Both of these pieces adapted well, and could only work with such superb empathy and balance between the performers.

An early work of Ravel was light and fun: whereas Houghton's 'Cave Painting', with its insistent beat and flute over, was disturbingly visceral and mysterious. We were left with a calm wonder.
Bartok's Romanian Folkdances were the final programmed pieces and here again we were captivated by diversity: compelling rhythms, fine delicacy and an exhilarating finale.
It wasn't quite the finale, however, since Judith and Craig judged the mood of the enthusiastic audience so well and gave us an encore of Philip Buttall's intriguing Waltzing Matilda.

I am sure I am not alone in being impressed by the versatility of a flute and a guitar in the hands of this duo. From bluesy half tones, through smooth, delicate and precise notes to the fiercely edged, Judith could produce them all with enviable breath control and poise. Craig's ability to bring out the chameleon from his guitar was wonderful to experience; an orchestra one minute and a gripping soloist the next.