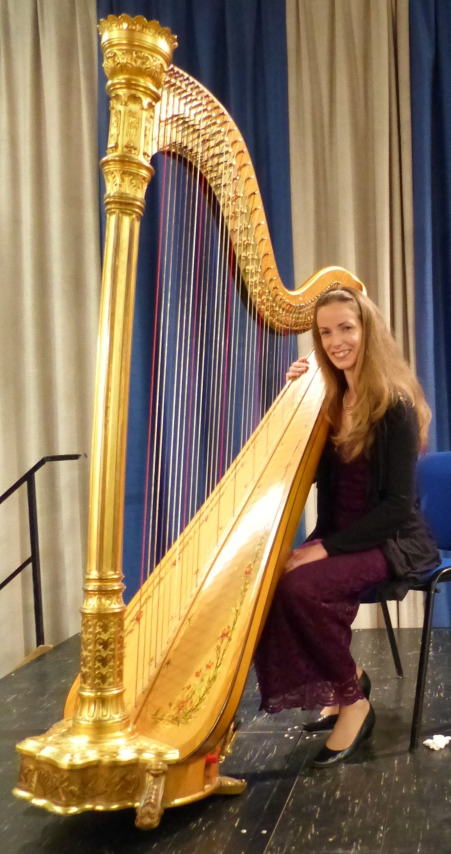 Sally Pryce's programme blew out of the water any ideas that the harp is just for nymphs, Celtic fringe Folk, and the arrival of the pantomime fairy queen. Britten's Sonata for Harp Op 83 was written for Osian Ellis [The virtuoso harpist whom I had heard playing in a NADSA concert in the 1950s]. This Sonata is somewhat of a showcase for both the performer and the diverse capabilities of the instrument. In Sally's hands, and indeed feet, the Sonata's 'Overture' had a mysterious mood of building drama that at times had a threatening bass. The Toccata was playful, bright and nervously darting. The Nocturne was pensive, and eerily produced a hypnotic tension. From an almost courtly opening, the Fugue became light and fun; whereas in the Hymn, after many ideas and a spiritual feel, we were left with an unresolved note, the resonance of which the harp does so well. This reminded us that it was only one instrument we had been listening to, not an orchestra.

Our musical feet were then firmly placed in harp territory with 'Watching the White Wheat', a traditional Welsh folk song arranged by John Thomas, the Welsh harpist of Queen Victoria. Here there developed a rippling background to a basically strophic melodic narrative that was sensitively and poignantly portrayed.
The Sonata in D by the blind Welsh composer John Parry put us into the Baroque style, with a lively and tuneful Allegro followed by a sedate and subtly phrased Andante and a concluding brisk and dancy Gavotte.
The impressionist style then flowed over us with Tournier's Sonatine Op 30. There were shimmering lights, delicate calm serenity, and sweeping climactic glissandi that lushly demonstrated the golden age of the harp in Paris.

Hindemith's Sonata [1939] brought us forward in time again. Its first movement's overarching phrasing was highly reminiscent of ecclesiastical grandeur and church bells, whereas the second was contrastingly playful. A poem, 'Friends, when I am dead', was the inspiration for a sombre, though serenely detached final movement. This was another superbly executed example of the power of the harp to create mood images.

In a lighter mode, Glinka's Variations on a theme of Mozart were thoroughly charming, and put me in mind, rather disrespectfully, of musical boxes!

Sally had given brief introductions to each piece; but, in the second part of the concert, she talked about the diversity of harps both in the Celtic fringe and further afield. Hers, being a concert harp, has the 7 pedal system which allows chromatic and key changes, albeit with some effort; whereas diatonic glissandi are easy.

Of all the music we heard in this concert, Hasselmans' La Source was the most familiar. With this familiarity goes the danger of expectations unfulfilled, but not so here: we were treated to a sparklingly sensitive rendition.

The Santa Fe Suite by the Welsh composer William Mathias drew the concert to a close. It was inspired by his visit to New Mexico: the movement 'Landscape' conjured a decidedly Spanish heat, whilst the final movement 'Sun Dance' was fiercely visceral.

How a concert of any one instrument could have been so diversely engaging is greatly to the credit of Sally Pryce's programme composition and structure skills. Her performance was acutely sensitive and an inspiring delight to experience.