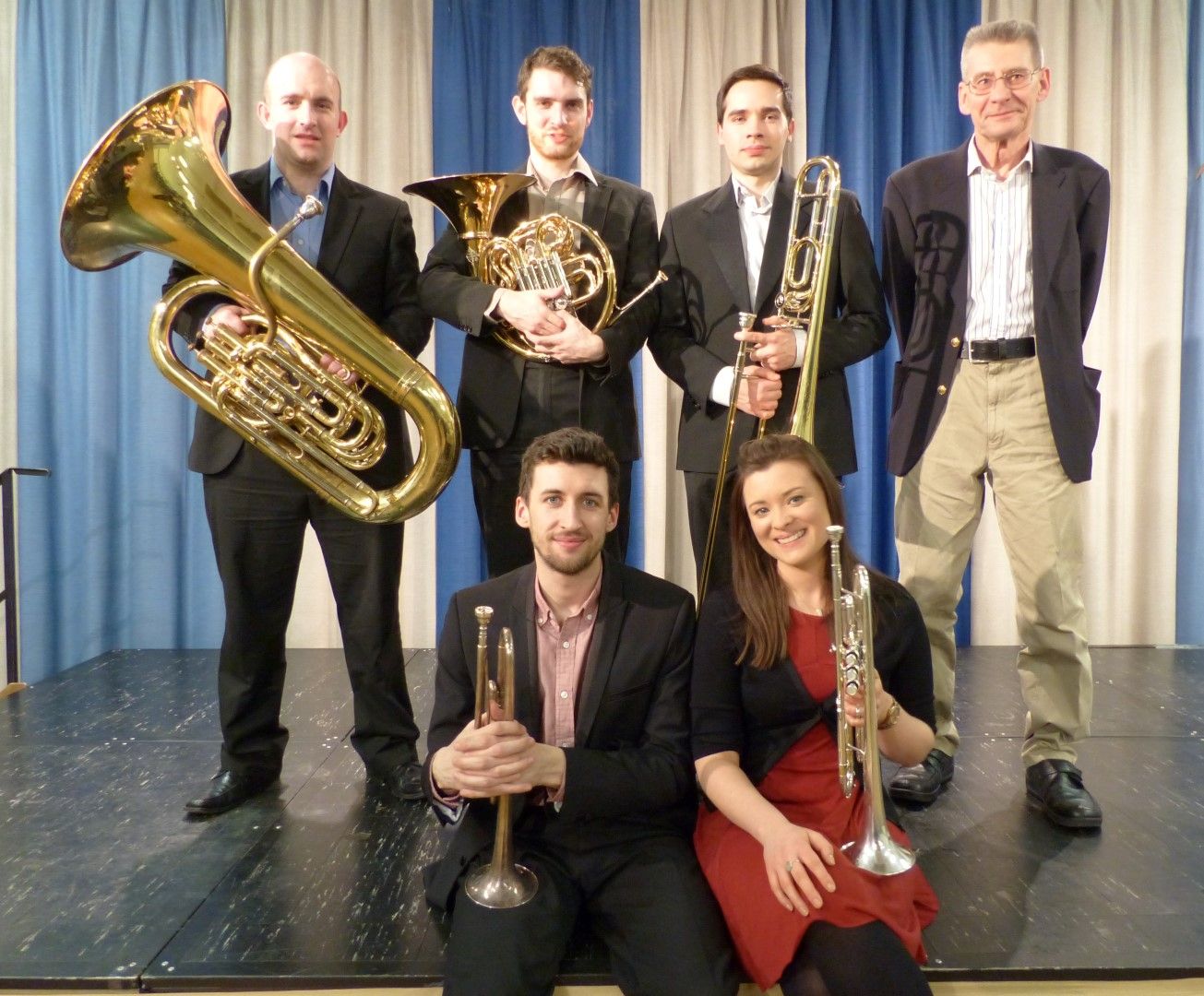 The opening number of Northern Brass dispelled preconceived ideas of what a Brass concert would be. Gone were our expectations of bombastic brass. Instead we delighted in the technical agility and lightness of touch that Bach's Little Fugue in G minor demands. The interweaving threads of Bach are so much easier to appreciate in a transcription where different timbres are there to help us. This was an enjoyable rendering of a well deserved staple from the classical brass quintet repertoire.

Ewald's Brass Quintet No1 has quite a different origin. A cellist in a string quartet in the 19th Century, Ewald was the first person to compose music specifically for brass quintets. The sombre mood of the Moderato was introduced by the tuba, and, although other instruments later took us to chirpier sections, the movement's closing mood was subdued. The second movement opened with a quietly melodic Adagio; this was followed by a light and intricately rhythmic Allegro, and we were returned to the melodic theme for the closing Adagio: a rounded movement well executed. The Allegro Moderato had an altogether brighter feel, with engaged responding phrases, and a final accelerando and crescendo that left us in no doubt that we were firmly in Romantic territory.

The Battle Suite by Scheidt provided The Northern Brass with another opportunity to demonstrate their musical versatility. The Galliard Battaglia was taken at an impressive, spirited pace, contrasting greatly with the smooth lines of the Courant Dolorosa lament. The Canzon Bergamasque had variety, within which rally calls were passed around, before the work ended in a mood of triumphalism.

Kat Curlett [trumpeter] encouraged us to ignore the outrage and pathos of Bizet's Carmen, by frivolously introducing the French horn player as Carmen [rose in wig], trumpeter as Don Jose [military hat], trombonist as Escamillo [tricorn and cape] and tuba player as The Bull [with horns and a tail]. Very pleasing to hear their Toreador Song had a light touch too!

It seems that Kamen's Quintet has become a 'standard work' for Brass quintets, and deservedly so. We were very fortunate to hear, live, Northern Brass' rendering of this romantic wistful piece.

And then we had Gershwin's three Preludes: a sandwich of one slow movement between two fast. The latter were exhilarating, not just owing to the tempo adopted, but also to the intricacy of the syncopated rhythms. At the slow movement, the trumpets took mutes, and we were transported to a sultry bluesy mood, slowly expanding with mutes off, then back to bluesy.

Next, Sondheim's 'Send in the Clowns' featured Kat Curlett on flugelhorn that proved to be an excellent substitution for the human voice: a memorable performance with a suitably empathetic backing.

A selection from Bernstein's West Side Story rounded off the programme. The welcome lack of sickly sentimentality in 'Tonight', and good spirits throughout, made for a strong finale.
Their encore, 'I got Rhythm', concluded a thoroughly enjoyable concert.
How good to see that Nadsa concerts provides opportunities to young and emerging groups. Who knows where this ensemble will be in ten years time?