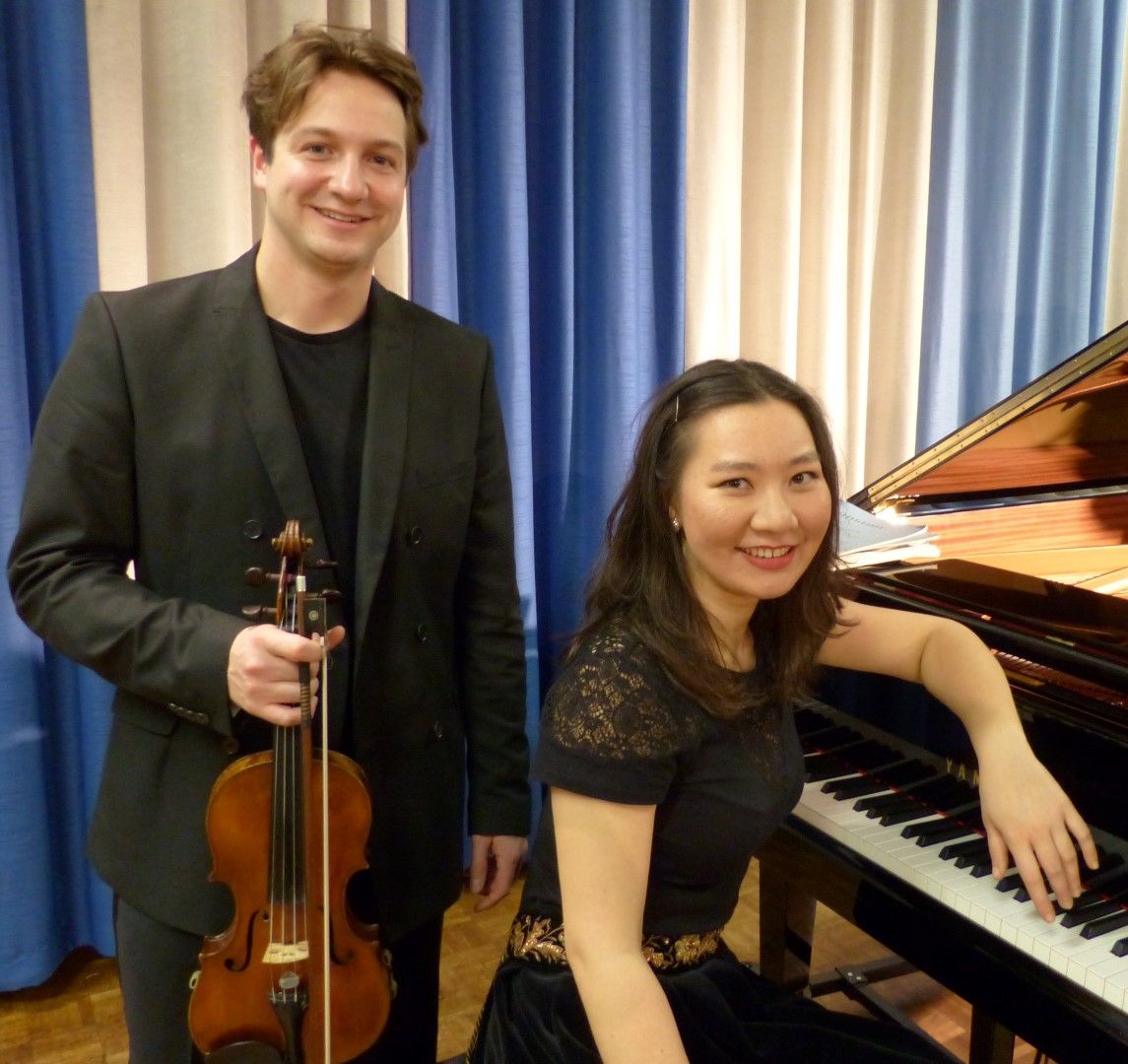 Alessandro Ruisi made a strong entry to Bach's Chaconne; but a few bars later a string broke!

Well these things do happen. He left the stage to replace the string. Unexpectedly taking centre stage, Dina Duisen the pianist said she would play a piece that mimicked the sound of the Dombra, a two stringed instrument of Kazakhstan, her country of origin. A surprise, not programmed, very different: but amazing. This 'Legend of the Dombra' by N.Mendypalier should perhaps be a required audition piece for any aspiring pianist. Its repetitive nature, quite minimalist in form, needs a hugely sensitive differential touch to give it enduring phrasing and direction towards an emergent melody. Dina's performance was spellbinding; one felt her soul was in it, and it won the audience's heart.

Alessandro returned unabashed to give an intense performance of the Bach. He produced beautiful tone, and his technical skill of stopping and phrasing allowed Bach's genius to shine. No small credit should be paid to Schumann [who arranged this piano version] and Dina for allowing the violin to soar.

Alessandro introduced the next work, Beethoven's Sonata for violin and piano No 3, as 'early Beethoven'. The same performers, a different composer and we had a totally different experience. This was a duo with interplay from the first few bars: definitely Haydnesque and fun. The Adagio, however, had a serene lyricism with legato lines that were a wonder of sensitive pianissimos.

Alessandro, after his experience in a previous concert, said that Lutoslawski's Subito for violin and piano should come with a 'Public Health warning'. Not difficult to see why. The dramatic forte violin entrance of a downward run was arresting, and the novel abrupt twists and turns did not stop there. Lutoslawski described musical composition as 'fishing for souls' well, in this 'Subito' he certainly cast the net widely. We were shot from lyrical dreams to nightmares, and from sublimely poignant moments to 'Tom & Gerry' humour. A kaleidoscope brilliantly executed.

With Dvorak's 4 Romantic Pieces and Schumann's Violin Sonata No 1, Alessandro and Dina gave us yet more contrasts. Within the framework of melodic simplicity, Dvorak and our performers took us through a wide range of emotions. But, on turning to Schumann, we had a drama and a richness which they maintained, even through the delicate Allegretto, to a frenzied finale.

An enthusiastic audience was rewarded with an encore, Paganini's Cantabile. This was another triumph, not only of programme planning, but also of a duo playing superbly as one. I hope they return to Newton Abbot: definitely names to follow.