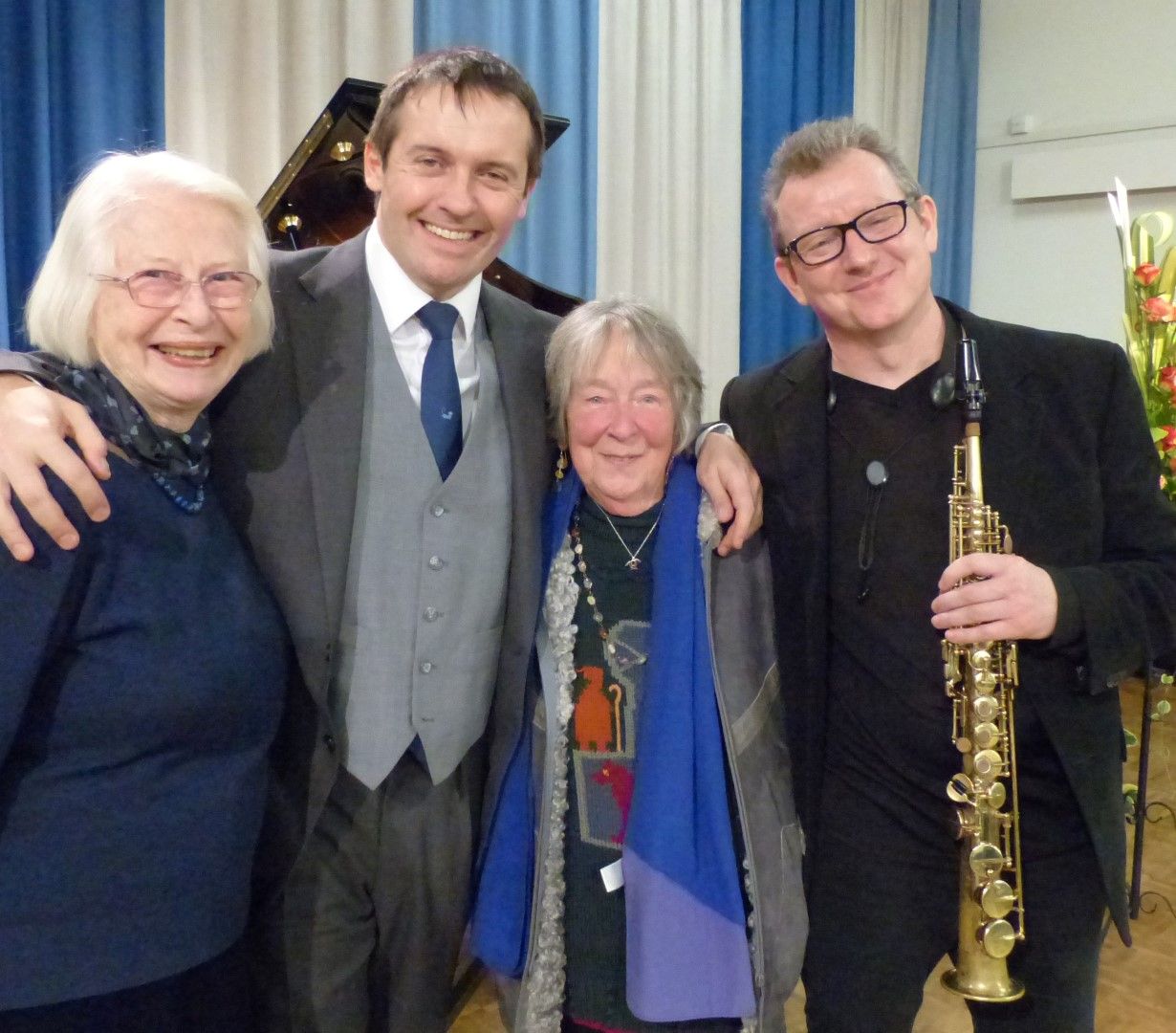 Simon Mulligan jetted across from New York last Friday and met up with Gerard McChrystal from Trinity Laban Conservatoire London, to give a concert for NADSA last Sunday. Their pianist and saxophonist skills melded superbly in a repertoire that was as eclectic as it was dazzling.

They chose to play with a backdrop of glass which gave a bright acoustic to the Courtenay Centre: the saxophone resonating the whole space even in low pianissimos. Rather than being a duo, they performed as one, and I felt no need to watch one or other of them and wonder in some voyeuristic way as to which was 'leading' now, and for how long, as I so often feel particularly with Jazz performances. This was inspirational excellence for the audience.

We started with Bach's sonata in E minor for violin and continuo; so immediately we had to make the adjustment of saxophone standing in for a violin, and a piano for harpsichord and viol de gamba. The combination worked well. The rendering was rather more romantic than could have been achieved in Bach's day; indeed Bach might have been envious.

The very familiar work by Bozza, Aria for Alto Sax & Piano, followed and mesmerised the audience. The smooth legato line was beautifully held with dynamics that took us to soft pianissimos.

Gerard changed to the sopranino sax for Vinci's Adagio & Allegro from Sonata 1 for clarinet & piano: also a huge change in style with a madrigal feel to the Adagio and sheer brilliance and virtuosity in the Allegro.

Maintaining the theme of variety and contrasts, we then heard Massenet's Meditation from Thais: so familiar and romantic, and wonderful when played like this.

Dinicu's Hora Staccato jolted us into the realms of gypsy spirit and speed, and then the first half of the concert was concluded with Borne's Fantasie Brillante on Themes from Bizet's Carmen. What a show-case piece this proved to be. There was excellent use of rubato and delicate pianissimos, but the sultry foreboding of the piano's introduction for the Habanera was deliciously disturbing. And then the saxophone took on the named role, and it seemed the chorus and the orchestra too. Only Gerard's stratospheric level of musicality and virtuosity could hold that together.

Pascal's Sonatine gave us a flavour of French Impressionism bringing us into the Modern musical era.

Schumann's Romance in A minor then took us back into the 19 century with a plaintive wistful melody and aching balance between piano and saxophone.

Our first contemporary composer of the evening was Nigel Wood. Simon and Gerard started his Man-Mou very delicately, but then expanded it into lush tuneful territory. This gave way to an up-beat syncopated jazzy section, the work later returning to the original theme. The piano was here again a full equal to the saxophone.

We then stayed in the 20th century with Valse Marilyn by Wiedoeft. Composed in 1927, it starts with a hugely evocative waltz, but the rubato became exaggerated until the bursts of speed, life and then extraordinarily sustained notes made this pastiche great fun, for both audience and performers alike!

Phil Woods' first movement of his Sonata for Alto Sax & Piano was next, and here we were taken from quiet beginnings to an intense and vigorous jazz interlude. Our second contemporary composer was Simon Mulligan himself, playing his own Sassafras. This piano solo started with great delicacy, then a hint of West-side Story, a lot of syncopation, and frothy intricate variations in jazzy honky-tonk style. A tasty morsel indeed.

Gerard described Pedro Iturraide's Pequena Czardas as 'Spanish Klezmer' this was their grand finale. The well known piece served such a variety of saxophone notes: creamy and lingering, light legato runs and precision staccato, not to mention a superb glissando. The piano shone in a solo introduction to a returning theme, and the saxophone cadenza even had percussive elements; above all the performance had a rousing spirit. A definitive experience.

This concert was special for Simon and Gerard too because in the audience was Simon's first piano teacher [from age 4], and it was through her that he had met Gerard. After relatively brief emotional exchanges, Simon had to leave for Heathrow and New York. Gerard gave a workshop for the children of Canada Hill School the following day, before returning to London. I hope it won't be many years before they are in Newton Abbot again.