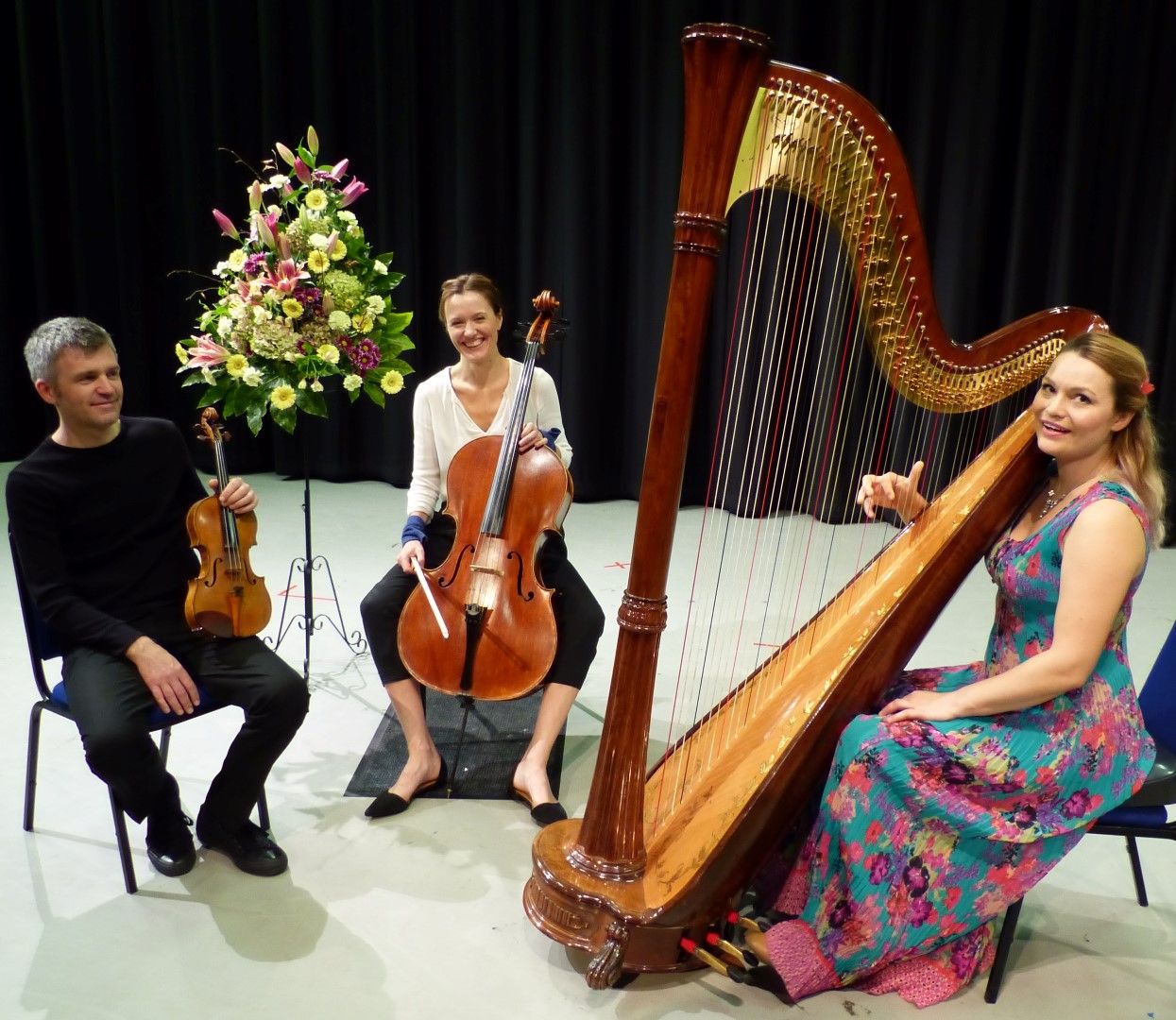 We plunged in at the deep end with Ibert’s Trio, written in 1944 for his harpist daughter. This was the programme’s most modern piece, and for me the most challenging, but what an assemblage of delights. Immediately the three instruments seemed to have their own lively themes, but then the soothing harp changed the mood and allowed the cello to introduce a melodic line that interplayed with the violin. The second movement held a sustained, more introspective, mood with glorious harmonies between the strings. The final movement was bright and mischievous.

Ibert’s trio was probably written to showcase his harpist daughter; Eleanor treated us to a fine display of supportive ripples, spirited interjections and sparkling glissandi.

Debussy wrote ‘Deux Romances’ for soprano and piano; Ronchini arranged them for cello and harp. The cello is often mentioned as a close match to the human voice, and this arrangement by Ronchini could well be quoted to illustrate the point. What a beautiful combination: Clare’s cello with the harp. With such warm tones, interplay of parts and heartfelt edge, who needed words.

Saint-Saens’ Fantaisie for violin and harp was written as a duo, and the two instruments complemented each other superbly. From quite humble beginnings the dynamics grew and grew, whilst the interplay between the instruments became finer. The violin had particularly impressive virtuosic episodes contrasting so well with the calm conclusion.

Two Romances by Saint-Saens followed the interval. Neither Romance in F Op 36 nor in D Op 51 was written for these instruments, so we heard arrangements for cello and harp. I am sure Saint-Saens would have approved whole-heartedly with both the arrangement and the performance we heard. Clare’s cello captured all the plaintive haunting feel of the horn for which Op 36 was originally written and wove beautifully with the supporting harp. One felt it strange that such elegant simplicity should be so moving.

Henriette Renie [1875 - 1956] is little known except in harpist circles; judging by her Trio for violin, cello and harp, this is unjust. The first movement, with romantic melodic lines, transported us to the 19th Century. A lively Scherzo followed which led to a poignantly melancholic third movement where David Le Page’s violin took us to another plane. A rich mix of themes in the finale had an exhilarating coda with a flourish of harp arpeggios.

The audience was very appreciative of the performance, recompense indeed for turning out on such a stormy night.

Chroma Chamber Ensemble had not only given us the rare opportunity to hear an unusual grouping of instruments but also a programme of French music seldom offered on the concert circuits. I look forward to similar opportunities from them in the future.

This NADSA concert, sponsored by Rathbones Investment Management, was part of the series sponsored by Austins Department Store.