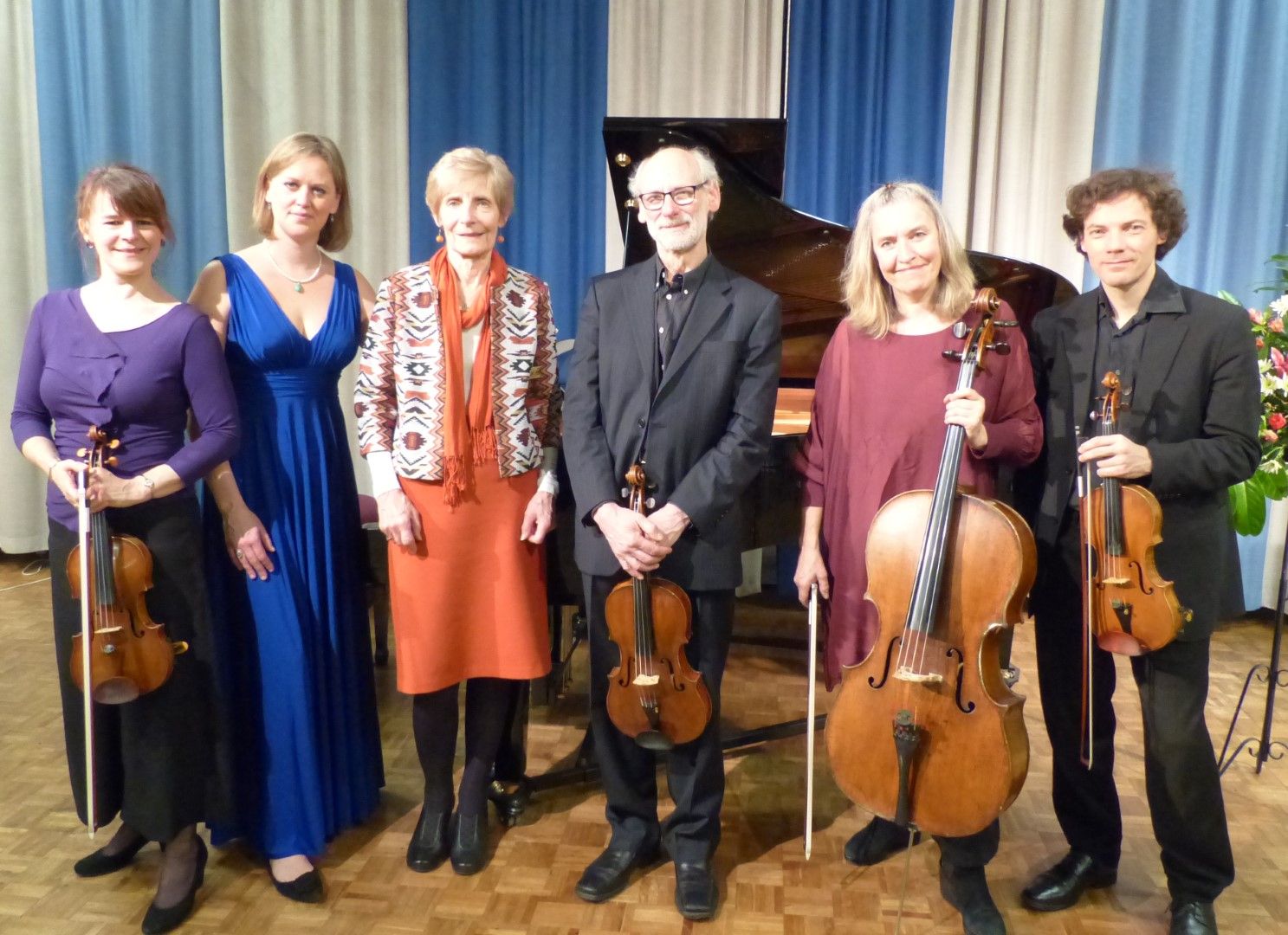 The Fitzwilliam String Quartet with Anna Tilbrook on piano

Two big names combined for nadsa’s January concert: the Fitzwilliam Quartet with its 50 years of international reputation, and Anna Tilbrook, whose CV of musical collaborations reads like a Who’s Who of the classical world. Both have renowned discographies.

Expectations of the packed audience were undoubtedly running high and were fulfilled in no short measure.

The rendering of their opening piece, Glazunov’s first Novelette, was spirited, rhythmic and delicate, which appropriately brought to mind a guitar and Spain. A languorous middle section kept us enthralled before we returned to a spirited and colourful conclusion. Glazunov’s third Novelette followed. The Fitzwilliam played warmly as one. A melancholic thread emerged and was serenely passed around the quartet, and there were pianissimos to die for: an electrifying atmosphere. Even with a capacity audience, it took a few moments for the spell to be broken and applause to erupt.

Suk’s Meditation on an Old Bohemian Chorale brought a change of style; a plaintive theme was well established before impassioned conflict broke out with deep-felt anguish, and, at last, a somewhat comforting resolution.

And then Anna Tilbrook joined the Fitzwilliams for Mozart’s Piano Concerto No.12. This option, to set a piano and a string quartet as a concerto, was a deliberate ploy by Mozart to make the score more saleable for Viennese drawing-room performances. So, the fact that it worked well is a credit to both Mozart and our performers. The Allegro’s instrumental introduction was light, even playful. That of the Andante was more sedate: very fitting for the subsequent piano’s more pensive line. However, the overarching glory of the performance was the warm sensitive balance between the instruments and their micro and macro phrasing. This made Mozart come alive. In Anna’s cadenzas, we not only had a beautifully sensitive touch, but also instinctive use of silence. No affectation here, just superb musical interpretation.

For those who thought they knew Elgar, his Quintet for Piano and Strings Op 84, might have come as a bit of a shock. Familiarity with Elgar’s song ‘Owls’ [1907] would enlighten one that his range of style stretches a million miles from Pomp and Circumstance. Even in the first movement [Moderato-Allegro] of this Quintet, written just after the first World War, we have ‘ghostly stuff’ [Elgar’s own words], episodes of melodrama and schmaltz, and a theme of rippling delicacy.

Giving us no place to rest, the Fitzwilliam and Anna played as one, and held us breathless in the pauses. Without over-familiarity, the Adagio presses all those buttons of heart-rending romanticism that Elgar does so well. From a poignant introduction, we later built to high drama, then returned to a calm tranquillity. The Andante-Allegro revisited a variety of previous themes before building to an affirmative grand finale.

There was no encore, despite enthusiastic applause. On reflection, I felt ‘how do you follow that?’; anything added might feel sacrilegious!