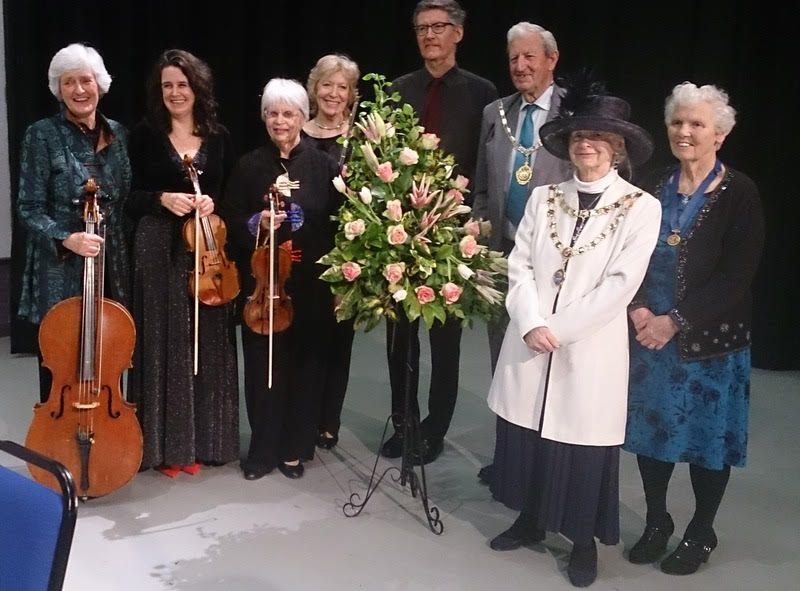 For the seventh, and final concert of their 73rd season, Newton Abbot and District Society of Arts left their home base in Newton Abbot’s Courtenay Centre to present a concert in Teignmouth Community School’s Performing Arts Centre, by five professional musicians who reside in South Devon. This was on Saturday 13th April – an unseasonably chilly night. The school, being closed for half term, was unheated. But the chill was soon dissipated by the warm glow generated by the appreciative audience.

The first half of the concert featured Australian born, internationally recognised flautist, Judith Hall with three members of the Totnes based Divertimento String Quartet. They played three flute quartets – each with an engaging verbal introduction. First up was Mozart’s Quartet in D introduced by violist Andrew Gillet. He explained that Mozart’s aversion to the flute was due to the fact that, in his day, it was difficult to play a flute in tune. No problem on that score when the flute is in the hands of Judith Hall. She gave a masterly performance in this concerto-like piece, ably supported by the strings. The second piece was rather different – Rossini’s first flute quartet – in which each stringed instrument had a share of the limelight.

In introducing it, lead violinist, Mary Eade emphasized that Rossini was but twelve years of age when he composed this, and a further five similar pieces, in a three day period for a group of friends to play during a holiday. Since Rossini himself had played the violin part, Mary Eade was happy (tongue in cheek) to refer to the programme note which pointed out that the virtuosic nature of the violin part indicated that the twelve-year-old Rossini was not just a gifted composer, he was also no mean violinist! And, like the mature Rossini we know, this earliest of his works brought a smile to ones face and warmed the coldest of hearts. Flautist Judith Hall then adopted an appropriately more serious tone in introducing Hommage à Chopin by Sir Andrzej Panufnik – a serious work written for a serious occasion.

She recalled that since being invited, by the BBC, to be the soloist in a performance of this work for flute and string orchestra she had always loved it, and when she started collaborating with the Divertimento String Quartet, she felt that it should be possible to adapt the piece for flute quartet. So she contacted the late composer’s daughter, Roxanna Panufnik, now a successful composer herself, who agreed and produced the version played in Teignmouth. If anything, without the weight of a full string orchestra, the music was even more potent in its poignancy though, to some in the audience, the modernist dissonance featured in the work produced a somewhat chilling effect.

But all was sweetness and warmth in the second half when the Divertimento String quartet (second violinist Lindsay Braga having replaced flautist, Judith Hall) played Bruch’s first string quartet. As the new girl on the block, Lindsay introduced this rarely played work by the composer of one of the most popular of violin concertos. With richly sonorous melodies and warm harmonies, this was music to bring the concert to a most contented close. Dedicated to the memory of Anne Sellars, a long-standing member of nadsa Concerts who died last year, this concert was attended by Teignmouth Mayor, Cllr June Green and Newton Abbot Mayor, Ken Purchase with his wife Dulcie.