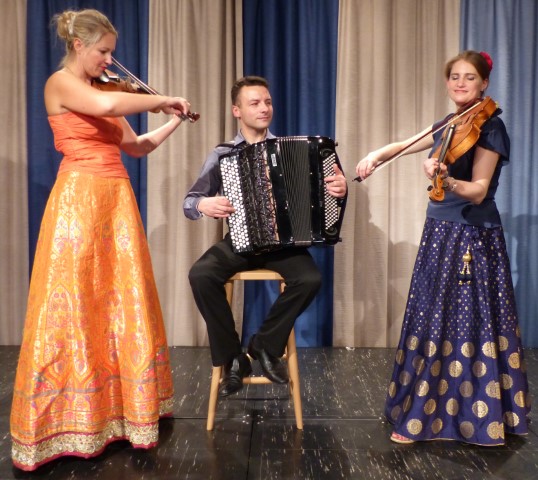 Kosmos took the stage at the Courtenay Centre and immediately burst forth into music. Was it Greek with a touch of Klezmer? Whatever its origins, it served its purpose since Harriet Mackenzie the violinist said ‘we thought we would bring you a bit of sunshine’.

The Ukraine was the next major source of inspiration, and for us, any thoughts of staying within our Western tonal system were blown away. Quarter tones were passionately used in an exhilarating mix of speed, rallentandos, fortes and pianissimos. How does one follow that?

Harriet made the moment. She spoke quietly poetic lines and a Serbian lament emerged. The audience’s electric silence between Harriet’s words was remarkably maintained until the music’s abrupt ending. A piece of musical drama Wagner might have been proud of.

Next we were told we would be having a Kosmos mix, and somewhere in it would be a Scottish reel. Back to vigour and verve and indeed fun.

Meg Hamilton introduced the following piece as of particular significance to Kosmos since it had been played at a wedding. A mix of sparkling Greek exuberance with tango. Then, just in case we might have felt musically tied to Mediterranean influences, we had mention of Japanese cherry blossom before hearing a Korean inspired love-song. Somehow, the cherry blossom stayed with me as the fluttering buttons of the accordion, new tonal juxtapositions and the upper register of the violin, with such delicacy, approached limits of the human ear.

Then we were back to Spain with dazzling Sarasate inspired compositions.

Milos Milivojevic talked to us about his classical accordion which has buttons instead of a keyboard. This enables him to span three octaves, instead of the keyboard’s one, and there are also greater possibilities of harmonic richness. Kosmos played a composition, written by a Serbian accordionist, to showcase the accordion, which joyfully put it musically centre-stage.

We were treated to the familiar theme from ‘Schindler’s List’ with Ashkenazi influences and, just to keep the international flavour thoroughly mixed, we had a spirited rendering of one of the most familiar tango melodies, Jalousie, which was composed by the Dane, Jacob Gade.

The final piece of the programme had a theme of birds, and our introduction was the thoroughly English Vaughan Williams’ inspired ‘Lark ascending’, - just superb. But then we flew off into other references, Saint-Saens’ swan floated by, plus a cuckoo and woodpecker; another kind of ‘Lark’ before dashing to a frenzied finale.

There was so much to take from this concert besides the Kosmos’ arrangements: Meg’s mellifluous viola taking us from calm beauty to stomach wrenching emotion, and Harriet’s violin flashing from raw spirit to delicate plaintive poignancy. Milos provided a smouldering intensity. The accordion in his hands was bold when appropriate, never overwhelming, and at times provided a staggeringly rich harmonic background that could fade imperceptibly with the strings’ pianissimos. For me, a new vision of an old instrument.

Comparisons maybe odious, but I found myself recalling a Menuhin/Grappelli performance. Harriet and Meg have brought their excellence of classical training to several genres of music where their instincts have full reign. I’m sure Menuhin would have been envious!

Whether as Kosmos or as individuals, wherever these three musicians perform there will be threads of genius.