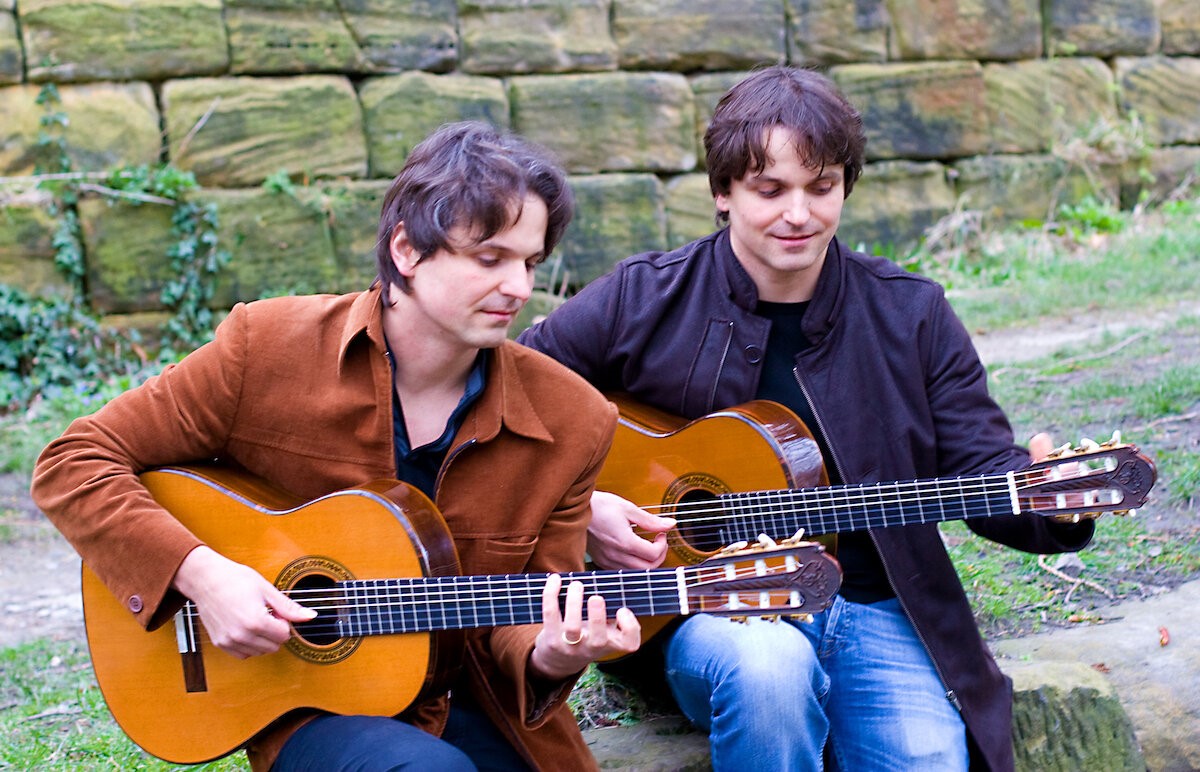 Critically acclaimed by the Daily Telegraph as “the classical world’s best-known guitar duo”, Peter and Zolton Katona effortless transfer from strictly classical, into more popular musical genres.  They have given recitals in major concert venues throughout the world including performances at the Carnegie Hall, the Wigmore Hall, the Concertgebouw in Amsterdam. The Konzerthaus in Vienna, the Suntory Hall in Tokyo and the Philharmonie in Cologne.

The twins have won over ten international prizes at major competitions in New  York, London, Germany, France and Hungary.  They were resident Artists of San  Francisco Performances from 2007 – 2011.

The wide repertoire of the duo spans from Bach, Piazzolla’s tango music to their own arrangements of pop classics.  Their programmes also include concertos for two guitars and orchestra by Rodrigo, Vivaldi, Piazzolla and Tedesco.  Several contemporary composers have written for and dedicated works to the Katona Twins.

Peter and Zoltan Katona were born in Hungary: they are German citizens and live in Liverpool.

Many baroque era composers wrote suites of dances for the keyboard to accompany actual dancers, but by the time Bach wrote his dance suites they were no longer intended for such a purpose.  They were purely for listening.  He wrote three sets of such dance suites for the keyboard – each a set of six suites.  Written in 1722, each of the six French Suites contains the four dance movements that was standard for the genre – Allemande, Courante, Sarabande and Gigue.  To these, Bach added two to four additional movements between the Sarabande and Gigue.  In the case of the  5th  French  Suite,  he inserted an additional three such movements  –  Gavotte, Bourrée, and Loure, but the Katona Twins arrangement is restricted to the four core movements.

French suite No 5 is the most tuneful and elegant of the six.  The  Allemande  (German)  is,  typically,  processional in style with a  moderately paced,  highly decorated melody whereas the following Courante (originally a French ballroom dance)  is a  lively dance in triple time.  The following  Sarabande –  a  dance of Spanish origin – moves in a slow stately rhythm also in triple meter.  As in the opening movement, the melody is heavily decorated to fill out the sound on a  harpsichord.  The closing Gigue (or Jig) is a lively dance of Irish/English origins –  presented here as a three-voice fugue that never rests.

In classical guitar circles, Agustin Barrios Mangoré – sometimes known as Agustin  Pio Barrios, is now almost as famous as Segovia although, at the time of his death in  1944,  he was barely known even in his native  Paraguay.    But,  in  1977  the legendary guitarist, John Williams, recorded an LP devoted, entirely, to Barrios  Mangoré’s compositions and claimed that  Mangoré was the greatest ever composer for the guitar.  The rest, as they say, is history.

Vals, Op 8 No 3, composed around 1919, is one of only three of the composer’s prolific output to be dignified with an opus number.    It is clearly inspired by  Chopin’s waltzes but has its own,  unique,  atmosphere of enchantment and romance.    It  is  a  rondo  in  structure  conforming  to  the  following  plan:  (intro)ABACA(coda)

We are indebted to the composer,  Peter  Katona,  for this programme note:  “Francisco Tárrega was a Spanish composer and classical guitarist of the Romantic period.  He is often called “the father of classical guitar” and is considered one of the greatest guitarists of all time.  Often, when my students played some of his most famous pieces, I started imagining several complementing voices besides the original.  I felt that they would add an extra dimension and show these well-known pieces from a new perspective.  Besides the completely new second guitar part, I have also extended the second and third movements with some new, but related musical material.  Since I also made a concerto version of this piece, I  added a Cadenza after the first movement.”

Django Reinhardt – actually Jean Reinhardt (Django being his Romani nickname)  was a Belgian born Romani-French jazz guitarist and composer who has achieved legendary status.  He was the first major jazz talent to emerge from Europe and remains the most significant.

Nuages  (Clouds)  and  Minor  Swing are two, of a number, of his most popular compositions which have become standards within gypsy jazz.  Nuages is quite a  delicate, moderately slow swing number with the juxtaposition of “sweet and sour” reflective of the composer’s gypsy heritage.

Minor Swing is more energetic but, apart from the brief introduction and final coda or playout, there is no set melody, just a repeated sequence of chords over which the performers improvise continuously until the end is decided and the playout performed.

Again, we are indebted to the composer for this programme note: ”The Scandal is part of my Karamazov Suite and was inspired by Dostoyevsky’s last novel, The  Brothers Karamazov.  It is a musical description of a scene in the first part of the novel.  The oldest Karamazov brother, Dmitri, has a quarrel with his father, Fyodor  Pavlovich, who plans to keep the inheritance left to Dmitri by his mother.  To resolve the conflict, Alyosha, the youngest Karamazov, who is an apprentice at the monastery, helps to arrange a meeting with the renowned elder,  Zosima.   However, the meeting quickly turns into an embarrassment as Fyodor Pavlovich makes a fool of himself by mocking the monks and telling vulgar stories.  Matters get out of control when  Dmitri finally arrives and becomes embroiled in a  shouting match with his father.  It turns out that they have more to quarrel about than money.  They are both in love with Grushenka, a beautiful young woman.   As father and son shout at each other, the wise Zosima unexpectedly kneels and bows his head to the ground at  Dmitri’s feet.    Suddenly an eerie silence,  a  foreboding that something terrible is going to happen,  fills the walls of the monastery.  As Zosima leaves the room, followed by the embarrassed Alyosha,  the shouting starts anew and the meeting comes to an abrupt end.”

The second piece we are to hear by Mangoré, Julia Florida, was written in Costa  Rica in 1938, and dedicated to his pupil, the strikingly beautiful, Julia Martinez de  Rodrigez nicknamed,  by her family,  Julia  Florida because she bloomed in adolescence!  Not surprising then that it is a madly romantic piece with a melody to die for.  It is a love song in the style of a barcarolle – the opening bars perfectly depicting the lapping of waves on a small boat – and, although very intimate, it demands to be shared by a  world audience.    It  is  Mangoré’s  version  of  Beethoven’s Fu̎r Elise

Based on seven folk tunes Bartók had heard played on a fiddle or shepherd’s flute in Transylvania, this set of six short dances was written, in 1915, for piano.  The composer later arranged it for a small orchestra and it has since been arranged for several different ensembles.    Each dance is formed from a  single melody except the last in which two folk melodies are combined.    In  Bartók’s arrangements, the last two dances are played without a break.  The first dance,  Stick Dance, is a stately affair whilst the second, Sash Dance, is delicate, and very short.  It is followed by In One Spot which is rather spooky and full of Eastern flavour.  The fourth, Dance from Bocsum, also has an Eastern flavour but is really lush in contrast to the last two.  Romanian Polka is a vigorous stomping affair which leads into the final dance, Fast Dance – an aptly titled piece that brings the work to a triumphant end.

From 1723 until his death in 1750, Bach resided in Leipzig, having been appointed  Cantor of the St Thomas School at the St Thomas Church in the city – the leading cantorate in Protestant Germany.  One of the obligatory and unalterable duties of the  St  Thomas cantor was the performance of a  festival cantata for the occasion of the changing of the council, celebrated each year during the last week in August.  His cantata BWV 29, Wir danken dir, Gott, wir danken dir (We thank thee, oh Lord, we thank thee) was composed for the festival in 1731 and was used again for this purpose in 1739 and 1749.

The most original part of this cantata is the introductory Sinfonia – an extensive concert movement for organ and orchestra.  Perhaps even more interesting is the fact that, for this important liturgical occasion, Bach was happy to recycle a purely secular work – Preludio, the opening movement of his partita in E major for solo violin, BWV 1006 written some eleven years earlier.  It is a marvel that music,  which had been conceived to suit the confines of a lone violin, could unfold into a work of such power and majesty as this celebratory sinfonia.  We are now to hear it, transposed back to chamber proportions, by the Katona Twins.

Lennon – McCartney was the songwriting partnership between the two Liverpool musicians,  John  Lennon and  Paul McCartney of the legendary pop group,  the  Beatles.  Unlike many songwriting partnerships of lyricist and composer, both  Lennon and McCartney wrote lyrics and music.  Sometimes, especially in the early years of the partnership, they would collaborate extensively when writing songs but later, it was more common for one of the two to write all or most of a song with limited input from the other.  By an agreement made before the Beatles became famous, Lennon and McCartney were credited equally with songs that either one of them wrote whilst the partnership lasted.  It lasted from 1960 to  1970,  and  between  October  1962  and  May  1970  the  partnership  published  approximately  180  jointly  credited  songs,  of  which  the  vast  majority  were  recorded by the Beatles

We are to hear arrangements of four of them – the first three written primarily by McCartney and the fourth primarily by Lennon.  Penny Lane, refers to a street in Liverpool and makes mention of sights and characters McCartney recalled from his childhood.  It is a happy, jaunty piece, and the recording was further enlivened by a  trumpet obligato added by a  session musician.    Eleanor  Rigby is quite different in mood and style.  It has been described as a lament for lonely people  – a comment on post-war life in Britain.  This theme of lonely, alienated isolation is continued in The Fool On The Hill, whereas Lennon’s Come Together, is a quirky setting of a gobbledygook lyric – possibly a sardonic self-portrait.