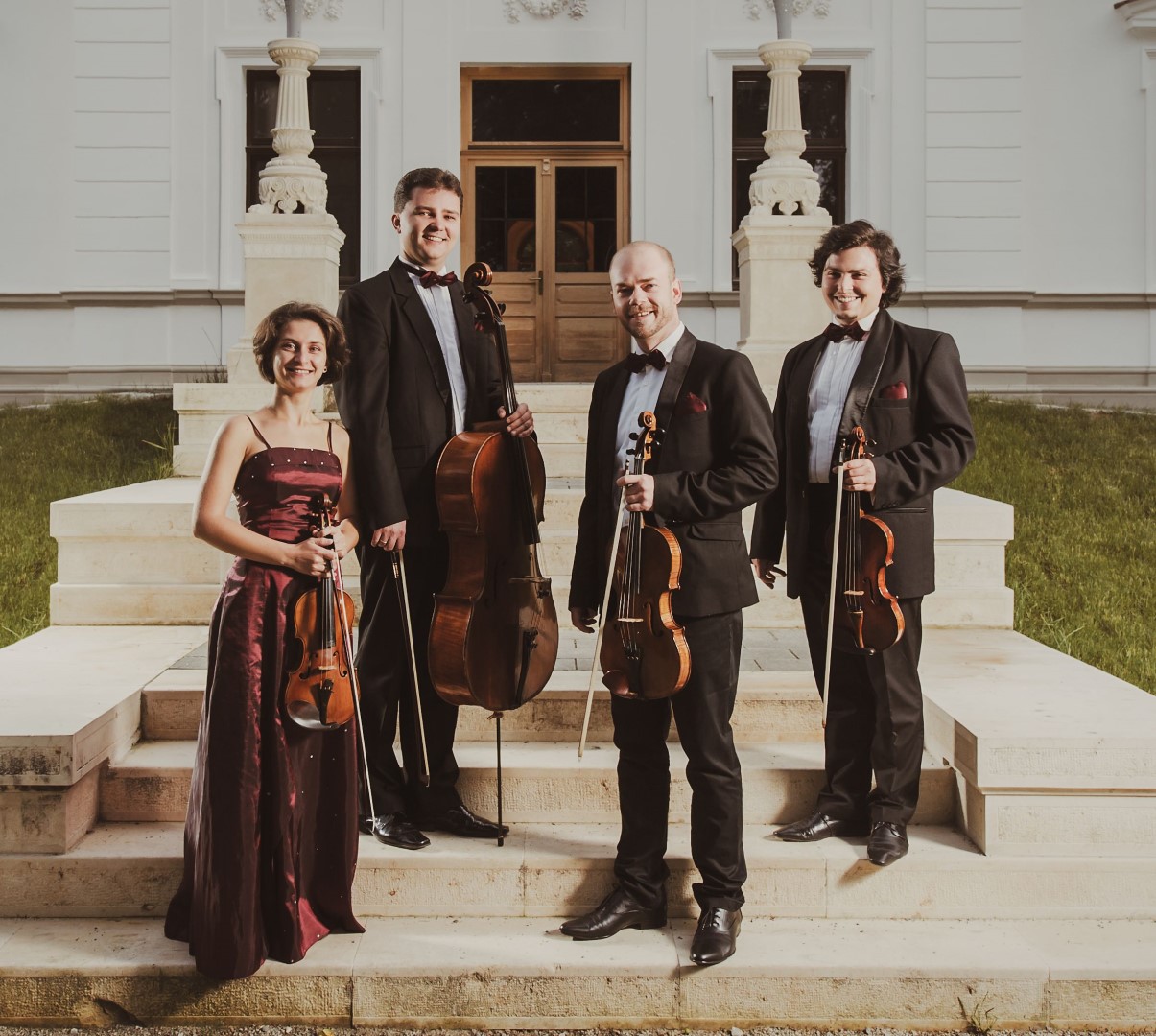 The Quartet made their BBC Radio 3 debut with a broadcast concert from the Wigmore Hall in March 2015, and in April 2015 were invited to become Quartet-in-Residence at the prestigious Tinerimea Română National Art Centre in Bucharest, playing six concerts a year broadcast by the Romanian Broadcasting Company.  The Arcadia Quartet’s debut disc of works by Mendelssohn and Brahms was released by Fontenay Classics in 2009 attracting critical acclaim.  Their recording of Janác̆ek Quartet No 1 and 2 was released on the label Orchid Classics in October 2013.  The Sunday Times wrote of “a beauty that pierces the heart” and that “both works are played with searing intensity by the fine young Romanian quartet”.  The Financial Times wrote that the quartet “create a mood of edgy expressionism that, in its violent swings and chromatic stresses, is shockingly direct and dramatic, like an opera – or a nightmare”, that “the result is an assault on the senses, piercing the heart of this unsettling music”.  The Arcadia Quartet started collaborating with Chandos Records in September 2017, launching an album containing the complete Bartók string quartets.  This double CD comes with commendatory five-star reviews from the worlds most esteemed music publications.  An extraordinary new project is now underway with Chandos Records: the recording of all 17 string quartets by Mieczyslaw Weinberg, the close friend of Shostakovich.  The first, of a projected 6 CDs, was issued in January 2021, to five-star reviews, and was named Record of the Week by both BBC Radio 3 and Westdeutscher Rundfunk.

Schubert’s famous unfinished symphony is, by no means, the only composition he left unfinished.  It is not even his only significant composition left incomplete.  This Quatettsatz – literally, quartet movement is the first movement of what had been intended to be a four-movement work.  For reasons unknown, it was abandoned after the composer had completed the first movement and just forty bars of a slow second movement.  But what an opening movement.  In a way, it is one of the most poignant and emotional of his works for string quartet and in no way sounds provisional or incomplete.  Indeed, it marks the beginning of Schubert’s maturity and stands, along with his three later string quartets (Nos 13, 14 & 15) and his great String Quintet in C, as a masterpiece of true genius.

As a boy, Franz Schubert played viola in a string quartet with his two brothers on violins and his father on cello.  So, it is hardly surprising that when he started composing at the age of thirteen, producing pieces for this home quartet was grist for the mill.  By the time he was nineteen, he had composed at least eleven full quartets suitable for amateur players.  He later dismissed these early works as being of no value.  There was a gap of four years before, in December 1820, he sat down to write his twelfth string quartet – but now as a mature composer of twenty-three determined to produce a work more intense and dramatic than anything he had attempted in the genre before.  The opening movement he completed accords with this ambition but it was to be more than forty years after the composer’s death, at the early age of thirty-one, before the work was published and performed.

The allegro movement is in traditional sonata form (exposition with two themes – exposition repeat – development – recapitulation – coda) except that there is not much traditional about it.  It opens, unlike any previous string quartet, with a threatening crescendo of shivery tremolo triplets starting with the first violin with the second violin, viola and cello repeating the opening phrase in turn.  The dramatic intensity is all the more powerful because it begins quietly.  The premonitory mood of this first subject (one can barely call it a theme) brightens, and then transitions, almost imperceptively, into a lyrical, song-like theme played by the first violin with triplet accompaniment and repeated an octave higher.  It is suggestive of serene happiness released from the darkness in which the work began.  But the darkness returns with a vengeance of tremolando out of which a new, more tranquil theme emerges before plunging back to the beginning as the whole exposition is repeated.  The development section is very brief, and the recapitulation is strange.  The opening subject is omitted – it begins with the lyrical song-like theme.  We realise why when, after the reprise of the tranquil secondary theme, the opening bars return to serve as a brief coda before full-voiced chords bring the piece to a dramatic close.

Beethoven’s heroic ninth violin sonata, a dark, disturbing novella by Tolstoy and Leos̆ Janác̆ek’s first string quartet are all linked by the same title – Kreutzer Sonata.  Who, one may ask, was Kreutzer?  Actually, he was a French violinist and dedicatee of the aforementioned violin sonata by Beethoven.  But he refused to have anything to do with it – pronouncing it unplayable!  And yet his name is only known today because of this dedication and the above three great works bearing his name.  (Although to be fair, he did leave a set of useful studies well known to all serious students of the violin).

In Tolstoy’s 1889 novella, a woman who is trapped in a loveless marriage plays Beethoven’s sonata with a dashing violinist and is carried away by the music’s passion.  Her husband, plagued by jealous fantasies, returns home unexpectedly, and finding his wife and violinist together, kills her in a fit of rage.  Janác̆ek was attracted by the novella’s dramatic urgency and emotional extremes and was inspired, in 1907, to compose a three-movement Piano Trio in which he gave Tolstoy’s story a different focus.  Tolstoy narrates the tale through the husband’s bitter point of view but, being something of a women’s libber, Janác̆ek empathised with Tolstoy’s heroine.  Regrettably, the manuscript of this work was lost.

In 1923, during a late period of tremendous creativity, the composer returned to this subject and thus was born his first string quartet – a passionate tribute to the glory of women and love.  As he wrote to his muse at the time: “I was imagining a poor woman, tormented and run down, just like the one the Russian writer Tolstoy describes in his Kreutzer Sonata”.  Janác̆ek extracted the raw passions from the literary original and in his fragmentary, episodic style, swings the listener across a huge range of emotions with skilfully handled contrasts, harmonic tension and arresting, anguished phrases.

The first movement is a portrait of the heroine – pure and passionate, whose impulses are frustrated.  The opening contains two elements: a slow anguished motif followed, immediately, by a fast, scurrying motif.  These two elements, in varying forms, dominate the first movement and, indeed, recur throughout the work.

The second movement presents the turning point with the appearance of the young violinist and seducer.  This provokes melodic and rhythmic destabilisation as we are led into the icy world of tremolo played close to the bridge of the stringed instruments.  The ice melts into fast relentless triplets, and the movement ends with repeated versions of the movement’s opening motif.  The third movement depicts the crisis in which the woman’s loving gentleness is set against her husband’s jealous rages.  Again, Janác̆ek’s scary tremolo is used to dramatic effect.  In the final movement, we see the wounded and tormented figure of the woman reach the height of her sufferings as a calm, peaceful version of the work’s opening motif is relentlessly developed with a fast, accompanying figure until it becomes a manic gallop to the exhausted end.

Felix Mendelssohn and his older sister, Fanny, were both musically gifted.  Like her brother, Fanny was a child prodigy and a composer of over four hundred works.  But, being a woman in the first half of the nineteenth century, the publication of her works was out of the question.  Felix and Fanny were very close.  She was not just his cherished sister: she was a trusted critic and colleague – his intellectual soul mate.  In May 1847 she was rehearsing one of her brother’s choral works in Berlin when she suffered a stroke and died.  When this news reached Felix, he was utterly devastated.  It is said that he screamed out and collapsed.

Unable to work he took a vacation in Switzerland, and when his musical inspiration returned, he poured his grief into his most dissonant and emotionally charged composition – this, his last string quartet, known as “A Requiem for Fanny”.  It was completed by September 1847 when he returned to Leipzig.  In mid-September, he made the difficult journey to Berlin to visit Fanny’s grave, and after returning to Leipzig, suffered a series of strokes and died on the fourth of November at the age of 38.

A long-time friend of the composer said of this quartet: “It would be difficult to cite any piece of music which so completely impresses the listener with a sensation of gloomy foreboding, of the anguish of mind, and of the most poetic melancholy, as does this masterly and eloquent composition.”

One can hear the emotional turmoil of the composer, disbelief, grief, anger, resistance, love, tenderness, resignation, longing for beauty and transcendence, and longing for death – it is all here in this music.  The first movement is in sonata form but there is no exposition repeat.  It starts with an introductory trembling utterance creating a sense of driving restlessness.  This tremolo is interrupted by a da-di-dah motif presented in canon style.  More tremolo is followed by a return of the interrupting motif but transformed and now acting as part of quite a long main theme.  A bridging section, featuring triplets, leads to a relatively peaceful, second theme, and the development starts with the return of the tremolo.  The interrupting motif is then dissected, and fragments are treated sequentially as the music rises to a screaming climax.  The return of the tremolo heralds the recapitulation and the main theme, bridging section and second theme get a second playing.  Yet again, tremolo signals the arrival of another section – this time, the coda.  It is based on the interrupting motif culminating in a frantic presto to bring the movement to a close.

The second movement is a scherzo and trio but with a coda.  It is like no other scherzo by Mendelssohn.  It is jagged and demonic and the central trio section is positively spooky. There is even something disquieting about the quiet endings of the scherzo sections and the coda – with pizzicatos fading into the ether.

The third movement brings a welcome repose.  A solitary descending scale in the cello sets in motion the first theme of this lament-like slow movement – full of lyrical beauty, and deeply felt melancholy, yet capable of soaring to a passionate climax – a sort of song without words.

The final movement returns us to the world of the first.  Again, it is in sonata form without a repeat of the exposition until the recapitulation.  It opens with a restless first subject which soon transitions to a more relaxed and lyrical second theme.  There is a long development section in which all instruments alternate between playing tremolos and various permutations of the first theme.  After rising to a frenzied climax there is a period of calm before the tremolos return to build energy towards the return of the first theme in the recapitulation.  This is so brief; it is likely to be missed – the second theme dominates.  But the first theme is used in the lengthy coda to bring the work to a raging conclusion.