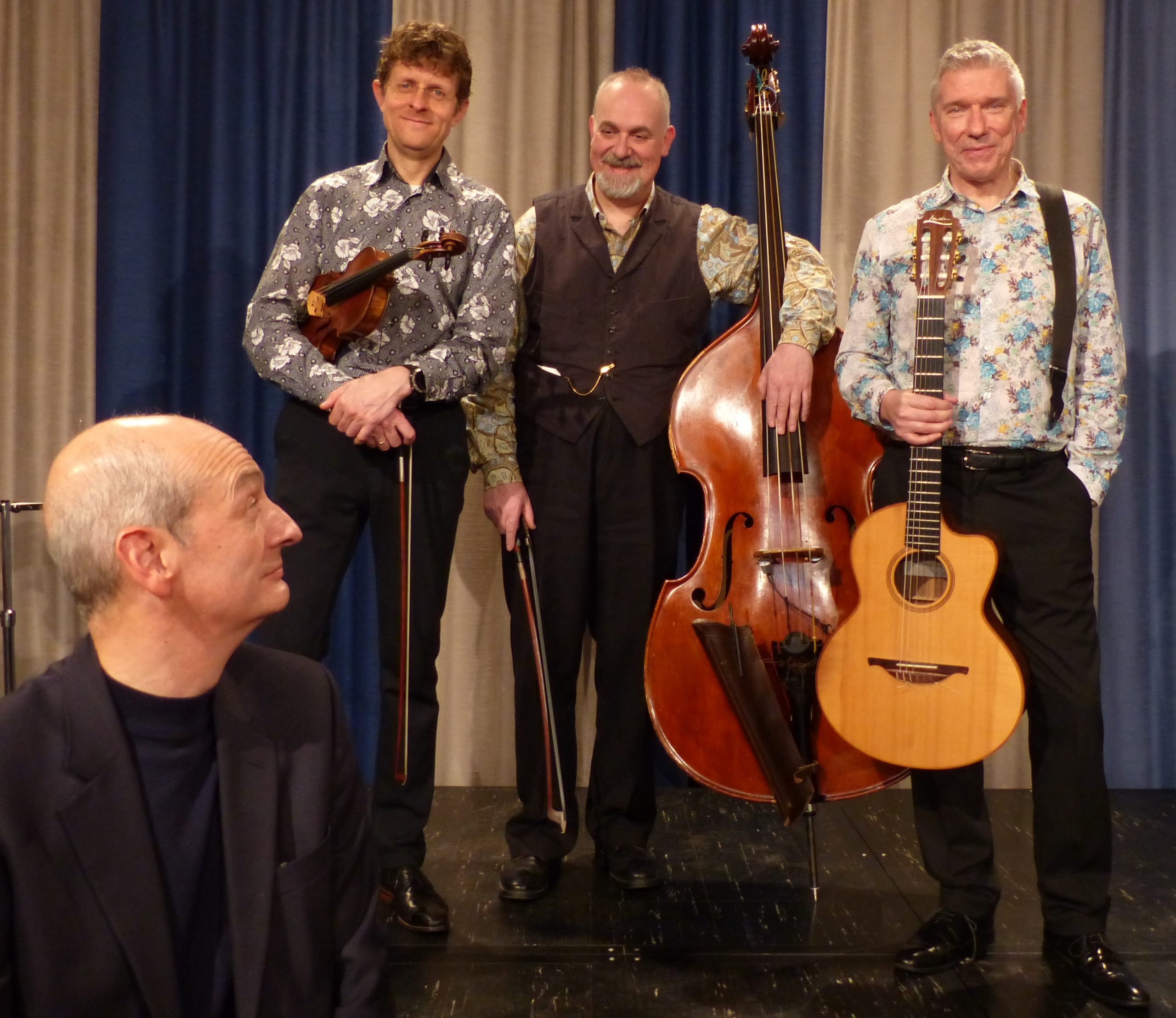 Stepping outside norms is usually risky, but when it’s the Tim Kliphuis Trio, they make the exceptional their own special province of excellence. The lucky ticket holders including the mayor and his wife, [the concert was a sell-out] were delighted with the happening. Their up-beat jazzy starter was followed by a plaintive improvisation with its recurring theme by Django Reinhart.

Tim introduced us to his team: Roy Perry [double bass] and Nigel Clark [guitar]. This is a trio of three masters in their own rights. Sometimes Nigel led us into a work, and Roy was featured to an extent that drew spontaneous applause. This trio inspires and carries an audience with them into a wide spectrum of music where many of us would seldom tread. The rapport which they have, both between themselves, their music and the audience, has to be experienced to be appreciated.

Bach’s Brandenburg suite was the inspiration for one of their offerings. One might have feared that an old friend was to be desecrated, but soon I was feeling how wonderful to have these themes in two versions. Bach with a Celtic jig shouldn’t really have surprised me given the Scottish and Irish connections of Nigel and Roy.

Tim told us about the composition of ‘The Five Elements’, which due to lockdown had to be finished using Zoom and Skype. It was premiered in his native Netherlands in September 2020. He related how ‘Water’, the first element we were about to hear, was inspired by Scotland, where the trio had met, and it follows a stream from source, to waterfalls, to being diverted through a distillery to a mature river entering the sea. With this prompted insight, the music felt like trickles and gurgles, then gaining more speed, drama and swirls, later widening out with the double bass for more depth in the mature river, only for its identity to be lost in the sea with some pianissimo bass notes. It really didn’t worry me that I missed the distillery!

There was great programme planning: sections of the new work were separated by more familiar ones. Tim said that Vivaldi’s Four Seasons had been with the trio for 6 years, so the last time they played for NADSAconcerts [in 2015] it must have been relatively new to their repertoire. This time we had ‘Winter’ and I certainly felt the touches of the bleak steppe. There were colourful interludes before returning to a high octane Vivaldi.

After improvisations with ‘Ain’t Misbehavin’ we returned to the ‘Elements’, with ‘Earth’ being lively, almost frenetic and brimming with diversity and threads of pathos; was it a note progression, as in Eleanor Rigby, which had this effect? ‘Air’ was more peaceful, wispy with bubbles of pizzicato, then wisps that faded with the double bass. ‘Fire’ was altogether more edgy with vortices and vigour.

Then on to improvisations with Paganinis' Caprice 24 by Andrew Lloyd Webber, popularised as the introduction to ITVs The South Bank Show. This upbeat finale drew spontaneous applause. Tim thanked the audience for helping to keep music alive, then introduced the encore saying that ‘Morgen’ was something which had helped him get through lockdown. The audience was palpably captivated by the purity of tone and exquisite expressiveness of the violin. A new dawn, and hope.

‘Morgen’ was the perfect foil for gypsy jazz, Bach and Vivaldi. Few others would dare, and probably none succeed, in carrying off a programme which included Hoagy Carmichael, Tim Kliphuis, ‘Fats’ Waller, and Richard Strauss. Let’s hope the trio return to Newton Abbot soon for another mind and senses stretching event.