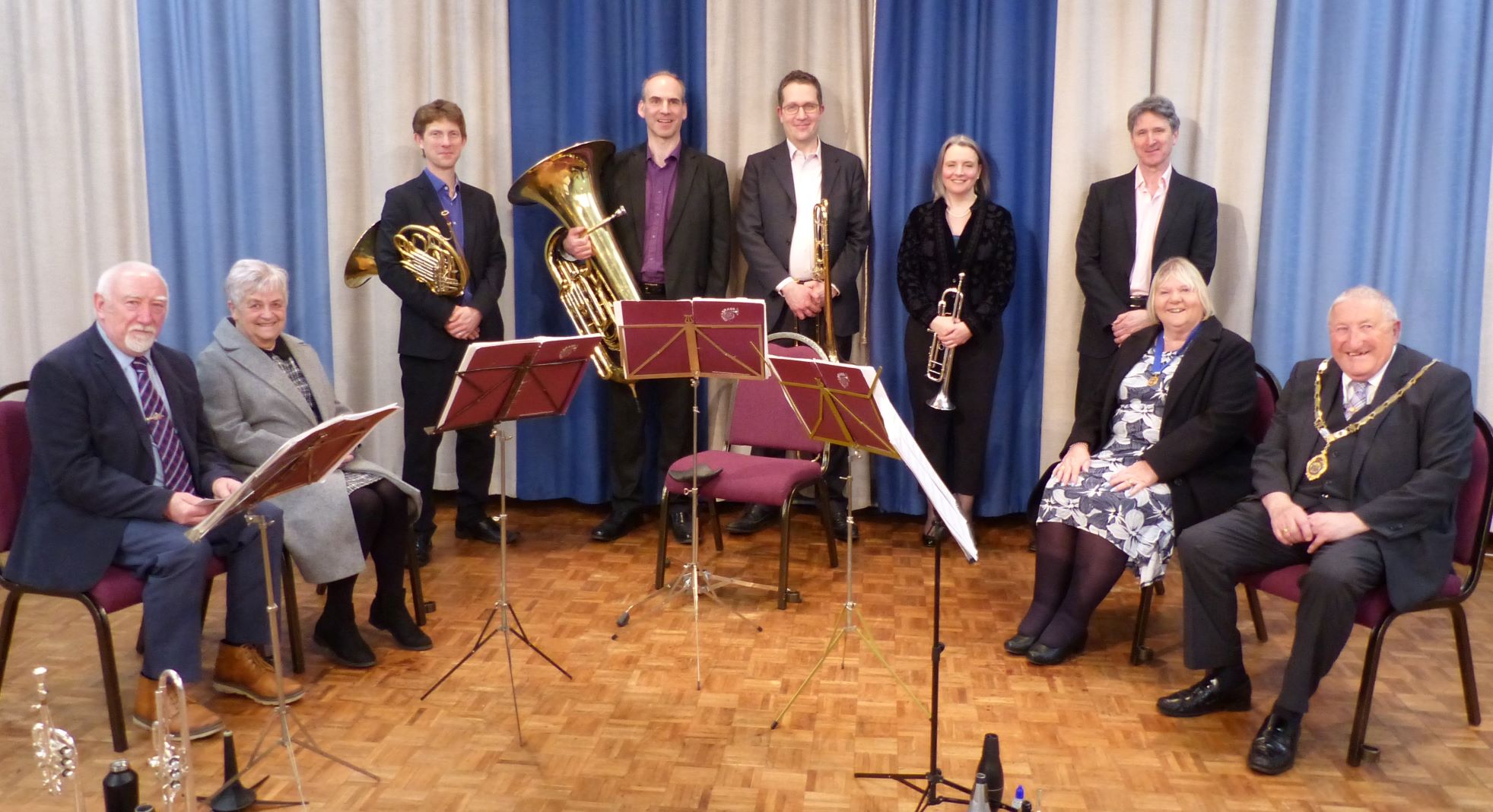 Covid 19 nearly inflicted a fatal blow to Onyx Brass’ Nadsa concert last Friday; both their trumpeters tested positive the day before. Amos Miller [Onyx trombone] told us that luckily we had distinguished trumpeter replacements from Fines Arts and London Brass. However, a two hour delay on the M5 meant we only got a performance by the skin of our teeth, with remarkably few programme changes: we lost Tallis and gained Oystein Baadsvik.

After Rameau’s Entree de Polymnie and Brahms’ Ballade opus 118, David Gordon-Shute [Onyx tuba] told us that Onyx Brass were approaching their 30th anniversary, and thus our programme was something of a ‘best-of’ mix and match. Indeed the eclectic mix spanned 4 centuries.

Amos said that, over the years, Onyx found they often came ‘back to Bach’. He elaborated regarding the link between the two A flat major Fugues they had programmed, one by Bach, the other by Shostakovich: two composer names I would rarely think of in the same breath.

David related how he had been inspired to research fanfares with Onyx’s horn player Andrew Sutton. This led to their discovering, publishing and recording Imogen Holst’s Leiston Suite. We heard the five movements range from a jig, an andante, a contemplative and wistful mood to a jolly folk-dance inspired finale; the entrance of course is a bright fanfare.

Familiar melodies and forms being played by unfamiliar instruments was fascinating. Bach on brass was particularly memorable. I found the fugue form much easier to follow with the very different timbres of the instruments.

This was a concert of two halves. After the interval, Maynard’s Fanfare burst upon us with majestic proportions. Following it was a delightful mixture of virtuosity and fun: David performing Øystein Baadsvik’s Fnugg solo for tuba. What a surprising mixture of notes and noises this combination produced. Our next delight was a spirited opening of Malcolm Arnold’s Brass quintet No 1. How good to feel gripped by intensity, even through the curiously named dour chaconne, to the finale which generously had solo lines for each instrument. Here syncopation and style took us to a thrilling close.

We audience were caught unawares by the next item [in three parts] devised by Tim Jackson. It was vocals, not brass. The first was a poem ‘Me’ consisting of interjections of ‘me’ in various rhythms and tones of voice, the second a visual pose of gazing, or listening, or whence came that silence, the third, inspired by Carol Ann Duffy’s ‘Mrs Darwin’, had Onyx vocalising as chimps.

Then they played one of their commissions: Mark Nightingale’s ‘Song for Rosie’. Jazz of a kind, it is a beautifully blended mix of harmonies and melodies. A credit to both composer and performers.

Onyx Brass brought their programme to a close with Gershwin: ‘The man I love’ and ‘They can’t take that away from me’. Immediately I pictured Ella Fitzgerald. Then I was transported to a smoky club with its exotic dancer before the tempo changed to a foot-tapping jazzy conclusion.

The value of a live performance has scarcely ever been more apparent to me. We moved from the interesting to the captivating and inspiring. Newton Abbot is lucky indeed to have such quality acts in its midst.